Cristiano Ronaldo, One of the Most Famous Footballers Today Has Become An Official Endorser of KFC Malaysia's Latest Campaign 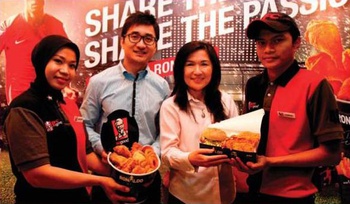 Kuala Lumpur, 1 April 2014 - Cristiano Ronaldo, one of the most famous footballers today has become an official endorser of KFC Malaysia's latest campaign and with football fever just around the corner, KFC Malaysia introduces its all new KFC Variety Bucket and Hotbox in conjunction with the football season.

"The football season is such a powerful experience which enables KFC and Malaysians to join together in celebration of the world's most popular sport - Football," said Ling Mee Jiuan, Senior Vice President, KFC Malaysia.

"With its tagline, Share the Taste, Share the Passion, what better way to watch your favourite teams battle it out on the field with family, friends and the all new KFC Ronaldo Variety Bucket that comes equipped with an assortment of KFC products for a group of four to five people or the KFC Ronaldo Hotbox created especially for all KFC lovers who enjoy a bigger eat," she added.

Variety bucket consists of five pieces of chicken, four pieces of boneless chicken, eight pieces of potato hash-rounds and onion rings, one honey mustard dip, one BBQ dip, and two free large fries. As for the KFC Ronaldo Hotbox, it comes with one piece of chicken, one drink, four pieces of potato hash-rounds and a choice of your favourite burger starting. Both the Ronaldo Variety Bucket and the Ronaldo Hotbox are available throughout Malaysia except KLIA, LCCT and Penang Airport (price may vary by location).

On top of all this excitement, KFC will also be releasing Cristiano Ronaldo limited edition premiums on a triweekly basis which will start with 6 different designs of 8gb USB Drive at RM19.90 and will continue with the Multipurpose Pouch, Water Tumbler and HEadphones that can be purchased along with any KFC product. The KFC Ronaldo Variety Bucket, the KFC Ronaldo Hotbox as well as the Cristiano Ronaldo Premiums have been available since 24 March 2014 at all KFC restaurants in the country (except those stated). 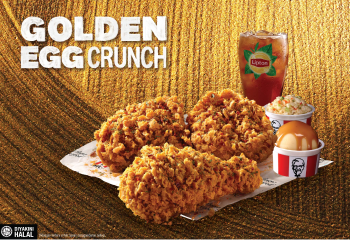 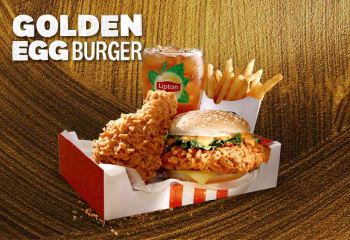 KUALA LUMPUR, 4 JANUARY 2022 - KFC wishes all Malaysians a Happy New Year and may your life be filled with golden moments. In celebration of the new beginning, we're bringing back our popular, golden fan-favourite flavour for everyone to enjoy the golden moments with. Go bold and go for gold this new year as KFC's most golden burger yet - KFC Golden Egg Burger is here to add mouthwatering delight to your new year merriment. 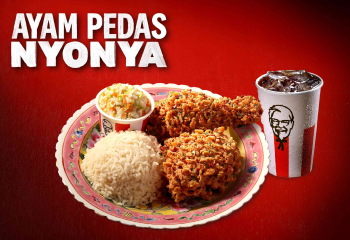 KUALA LUMPUR, 29 NOVEMBER 2021 - Born out as a hybrid of cultures from Chinese settlers and local Malay during the colonial era, the Peranakan culture has had significant imprints on the Malaysian culture and inherited us with rich cultural heritage. Boasting rich food traditions with unique and bold flavours, Malaysia's celebrated Peranakan culinary is the inspiration for our newest limited-time-only menu, KFC Ayam Pedas Nyonya.